Actually the little toys cars were provided for her nephew as a present. But Mandy cannot differently: It is too strong to destroy the drive in her. She takes the little plastic cars from the packing, throws them on the ground and increases with her boots on this. Hers pitilessly chops them mega-disco boots with the gigantic plateau heels the toy. With a whole destructive mania it enters on the cars like a gigantic concrete hammer, this the small parts after all sides shatter only in such a way. Only when the last small parts are stepped out out of the cars, it abandons them. Den letzten Teil, der durch ihre Tritte wegspringt, verfolgt sie sogar in den nÃ¤chsten Raum.It pursues the last part even into the next room which romps by its kicks. 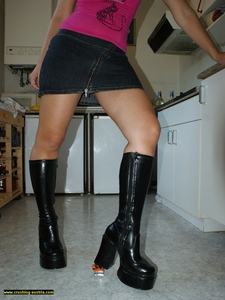